Dollarama has negative book value – Is this a massive risk? 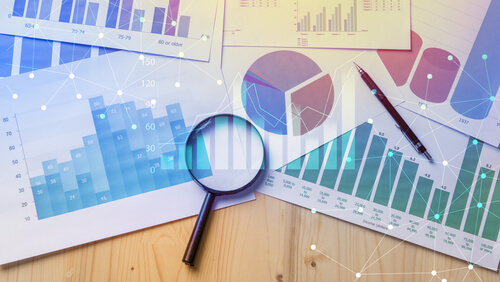 A reader asked a very interesting question on the comment session:

“With the recent price drop in Dollarama, I am tempted to start a position. However, its book value per share is negative. Would this be a concern?”

Before diving into Dollarama’s specifics, this is a topic that I’ve seen discussed before, so I thought about gathering all that information on this post instead of a simple reply on the comment section.

As an investor, you need to be able to see all aspects of the business in motion, and why it’s important to take other metrics into consideration – and visualize both present and estimated future for that business.

Diving into the specifics of book value:

Simply stated, book value is calculated as the difference between a company’s total assets and total liabilities. As Marc Gerstein elegantly explained, an accountant would say that this is the purchase price of an asset, minus adjustments such as depreciation and amortization (fancy calculations that supposedly incorporate the deteriorating usefulness of that asset as time passes) plus adjustments for amounts you spend to improve the asset over the course of its life. Keep in mind that when we switch to the investor’s vantage point, we typically talk about the company as a whole, not each individual piece of it. And also, that book value is the amount of “permanent” capital attributable to owners of the business (i.e., the shareholders), as opposed to creditors.

In theory, book value is the value that should be received if a company is sold. In the real world, it almost never works this way (try screening for a company with a P/B = 1, you won’t find any). So when Warren Buffett says, as he does, “it is likely that – over time – Berkshire will be a significant repurchaser of its shares, transactions that will take place at prices above book value but below our estimate of intrinsic value” you should mentally add the following: “Book value is a conservative single point in time ‘snapshot’ of a company’s value that makes no allowance for future growth and profitability. Our expectations of the future are such that buying back stock at a premium to book value will be fine so long as we buy at a discount to our expectations of book value plus the impact of future growth and profitability.”  What does that mean? It means that somehow some other value will have to be pegged (imprecisely, though, given that we’re dealing with the unknown future) to the present value of expected future cash flows.

So what book value does ignore is future growth expectations. That’s why we should never expect the P/B to always equal 1.00. Stocks trade at a discount or premiums above book value based on future expectations — a familiar refrain from other aspects of stock valuation. Having said that, what about when book value is negative?

Debt is cheap and it’s one way to fund business growth. Therefore, book value alone can’t tell if it’s bad or not, because not only it depends how that debt will be used and what the future growth will be, but also that other factors regarding fundamentals need to be taken into account (some examples include that operating liabilities and financial liabilities should be analyzed separately, net financial obligations need to be compared to EBITDA and Free cash flow, EV/EBITDA is more important than P/E, etc).

Not only negative book value alone is meaningless to the quality / fundamental aspect of a business, but also the price-to-book-value ratio it also doesn’t help with valuation of a business. The relationship of the market value and the book value of equity tells you almost nothing of any use because it ignores almost everything of importance about the company and treats the entirety of a company’s debt as a problem rather than a possible solution. Travis Fairchild’s has a great article on book value and the opening paragraph sums it well: “The price-to-book ratio has a problem. More and more U.S. companies report negative book value, the result of accounting rules and structural changes in the market. This creates broad confusion and problems for the famous value factor, and indexes or strategies which rely on it as a measure of cheapness. Negative equity companies are often written off as distressed, but after reporting negative equity, most of them survive for years and have, as a group, outperformed the market 57% of the time. There are currently 118 companies in the U.S. market with negative equity. These companies have had negative equity for an average of over three and a half years, and 25% have had negative equity for over five years. One example is Domino’s Pizza which has had negative equity since their 2004 IPO but has outperformed the S&P 500 by a cumulative 1,442%. McDonalds, H&R Block, Yum Brands, HP, Motorola, Denny’s, AutoZone, and Wayfair are also on the list of those with negative book value.”

Yuval Taylor described it well: The basic problem with book value is that by subtracting a company’s liabilities from its assets, it treats those liabilities as detracting from a company’s prospects (which is the basis of its valuation). Nothing could be further from the truth. Both debt and non-debt liabilities can power a company’s growth and are often necessary to its survival. Book value measures a subset of a company’s assets, but it’s the more expensive subset, as the cost of equity is by definition higher than the cost of debt. And investing in companies with a lot of debt on their books can provide an investor with cheap leverage.

How does a company (Dollarama included) leverage debt? If a company doesn’t think it has enough opportunities to profitably reinvest its profits (for example, by earning more than the cost of capital), then it should give excess back to shareholders. If the company doesn’t do it, shareholders will pressure and challenge management because shareholders don’t like to see excess cash on the balance sheet.

Dividends are the traditional method by which excess profits are given to shareholders. But from the management perspective, share buybacks have a particular appeal:

First, the stock often bounces because commentators over a generation convinced many in the investment community that this is better than a dividend, since its better to think in terms of tax on a capital gain that may or may not ever be realized in the future as opposed to tax on income (albeit at a favored rate) that you actually get cash in hand; so managements love to be loved and, hence, love buybacks.

Second, for management, buybacks are way better than dividends because this gives management the freedom to be completely random and erratic in what they’ll give and when they’ll give it as opposed to dividends, which tend to be regular and, hence, a sort-of commitment.

Third, with debt so cheap, it’s tempting to leverage up the balance sheet by borrowing to repurchase shares.

Therefore, to make an investing decision, one should never take a metric in isolation, and always look at the package that composes the business.

No datapoint is perfect. Every data point is subject to whacky things. That’s why we have a multitude of valuation metrics. They all tell different aspects of the story and the reason we look at more than one is the same reason we own more than one stock — to diversify against the risk of idiosyncratic problems with a single metric. Book value can be negative. Earnings can be negative. Cash Flow can be negative. Free cash flow can be negative. Sales can’t be negative (absent some rare and unusual accounting protocols that net things out against gross inflows before reporting on the sales line), but sales can be wildly distorted up or down. Growth can be negative. Yet all are regularly used in valuation. Hence, it’s best to look at the whole package and use all metrics available.

Due diligence on Dollarama:

Dollarama is a growth company, founded in 1992, but it went public in 2009 only.  It has continuously delivered earnings and cash flow growth. I’ve specifically removed stock price, so the graph can show the business results only: 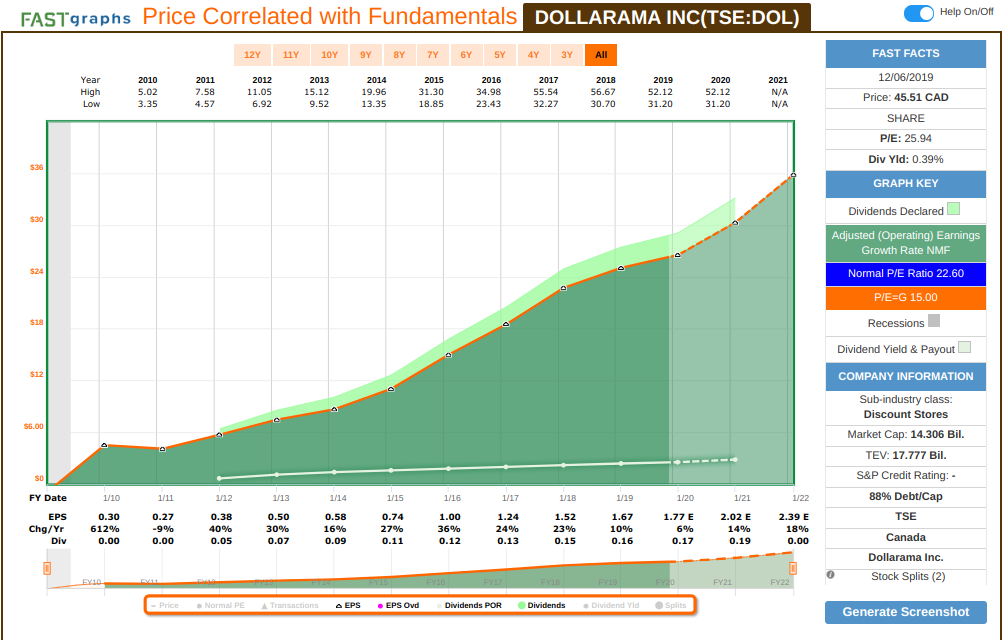 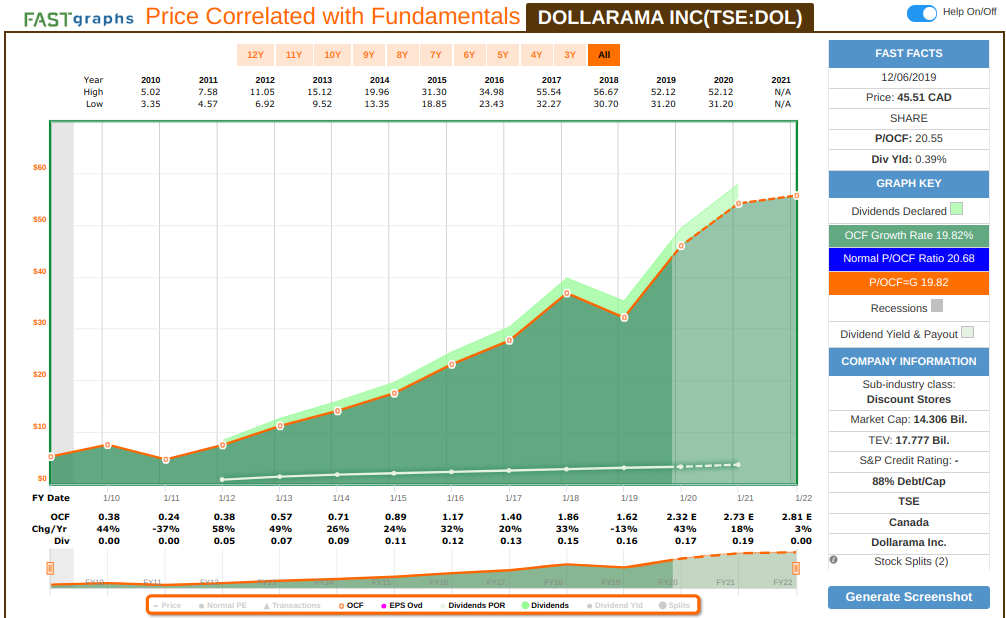 Dollarama cash flow metrics are below. It keeps growing healthy, and the last metric, Float, shows the number of outstanding shares. We can see that Dollarama keeps continuously buying back shares, a good use of cheaper debt – and why when you look at the whole package, the negative book value becomes less of a concern (During Q3, a total of 2,772,340 common shares were repurchased for cancellation under the NCIB, for a total cash consideration of $129.8 million). 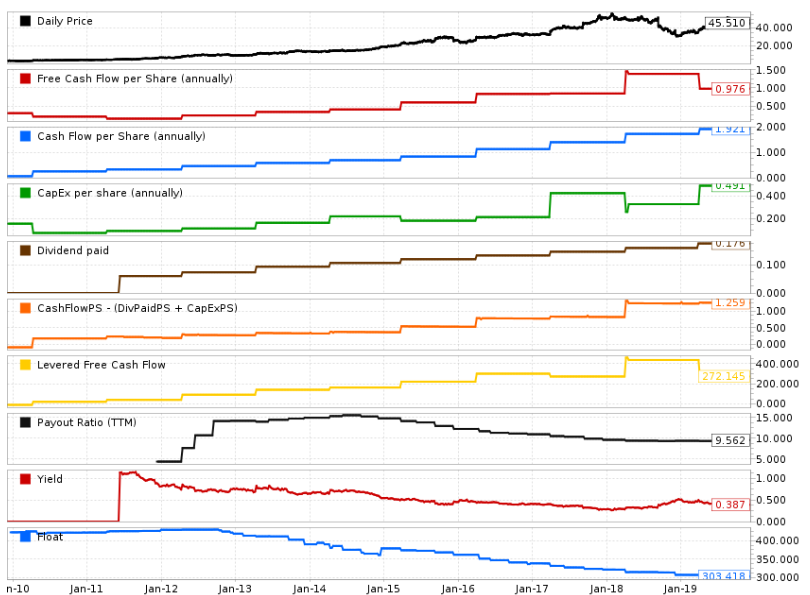 Lastly, accounting changes also need to be taken into consideration. Dollarama has adopted IFRS 16 since February 2019, which impacted their assets and liabilities (net financing costs now include costs related to lease liabilities).

Focusing on the business, Dollarama a few specific metrics for growth that I like to pay attention to. The first metric is same-store-sales, and last quarter they were up 5.3% during the quarter off a 2.4% jump in transactions. The 5.3% mark topped the consensus expectation for a 3.8% comp. This was a strong same-store sales for a third consecutive quarter, though Q3 was boosted by ~ 100 bps as a result of a shift in the fiscal calendar to include Halloween, which will reverse in Q4 – but even adjusting for this, results were health. Management confirmed that they are on track to open between 60 to 70 net new stores by fiscal year-end. Dollarama sees full-year comparable sales growth of +4.0% to +4.5% vs. +4.5% consensus.

The second important metric for Dollarama is gross margin. Gross margin fell 60 bps to 43.7% of sales. Net income was $0.44 vs. $0.40 a year ago. Gross margin was in line with expectations, as they continue to operate in a low inflation environment, in which retailers are more reluctant to pass on cost to the consumer.

The third important metric for me is cash flow, since my focus in on dividend growth. Cash flow generated from operating activities increased from $129 million to $203 million, an increase attributable to higher earnings in the current quarter and to a lower use of working capital as a result of the timing of payments of payables, partially offset by higher inventory levels.

The fourth important metric for Dollarama in my opinion is operating cash flow ratio, which I use for valuation. This is useful for companies with a strong growh ratio – Dollarama has an OCF growth ratio of 19.82%, so it applies well. From that perspective, it’s fairly valued and estimated to grow: 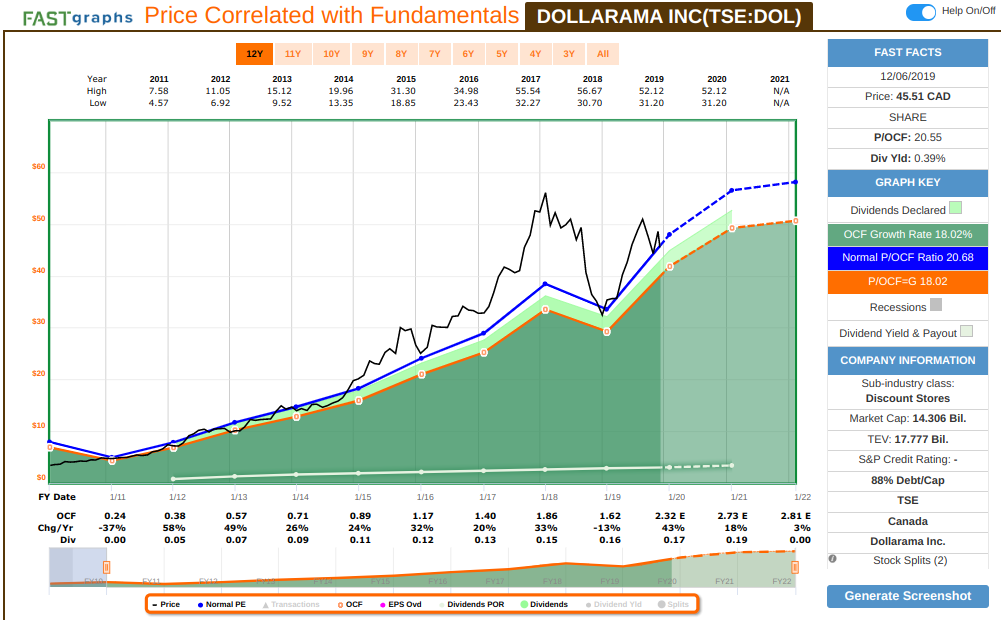 However, that growth is estimated to slow down in FY22. So we should take earnings growth into account, as slower growth / mature companies tends to follow earnings closer than cash flow growth: 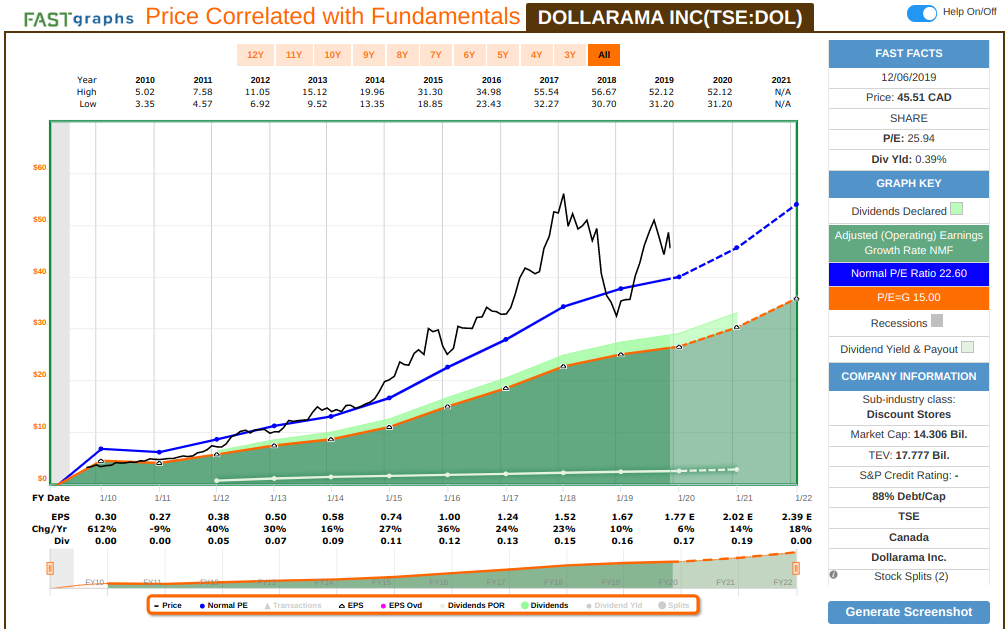 The graph above aligns the historical growth with the future growth, at a rate of 18%. So from this perspective, considering the typical ratio that the market prices Dolarama, Dollarama is fully valued (limited growth for next fiscal year), but further growth after FY22.

So although I see no deterioration from a quality perspective, I would be careful with the current valuation. I would buy a partial position at $43 and would deploy the rest of capital once it matches the blue line for earnings.