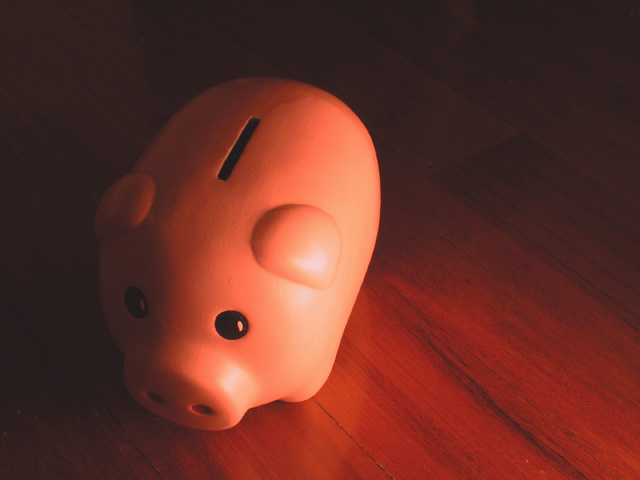 My preference is to invest in the best 3 (from an earnings growth rate standpoint) of the Big 5 banks, and on 3 smaller banks, besides investing in other type of companies from the financial sector (alternative lenders, insurance, etc).

Below follows the valuation for the Canadian companies in the Financial sector:

BNS is fairly valued, trading a bit below its historical 5-year blended P/E of 11.6: Earnings are estimated to improve for the long term as well, making it an attractive entry now: CWB is very undervalued, with the negative sentiments around the crash in oil prices and its presence in Alberta. Earnings are estimated to decline by 4% this year (not huge), and estimated to grow by 4% in 2017. It’s clear to see how the current fear makes this company trading way below its intrinsic value (in perspective, I’m putting a 10-year grapth, which shows similar panic during 2008, while their earnings didn’t decline as it was feared: I don’t keep assessing fundamentals every time there’s a big price drop. I first do my due-dilligence from a quality perspective, and if the stock makes it into my watchlist, that’s equivalent for me giving the go-ahead to sign a contract to join a business. Time is required to evaluate that business again, regardless what happens during the initial years. That’s part of the temperament required that many tend to put aside when a stock keeps dropping and all one can hear is bad news. First, any business public or private, derives its value based on the underlying performance that the business generates. These value drivers include, but are not limited to, operating results such as earnings, cash flows, sales (revenues) and dividends. Common sense tells us that the true value of a large multinational business, or any business for that matter, cannot possibly change as quickly or as much as daily price quotations would indicate. Stock prices in the short run can be driven by strong emotions, such as fear and greed. The intrinsic value of a business is driven by fundamentals and can be calculated within a reasonable degree of certainty.

That’s why when I do my due-dilligence regarding quality, I do not look at the stock price or how it’s been performing. It’s all about the business, its fundamentals and earnings performance. When valuation is to be assessed, I don’t question its quality anymore, because that was already evaluated. An undervalued stock is likely to not have any love from the market and be surrounded of bad news. This could drive an emotional decision to not proceed with investing in a business that is priced attractively. Again, temperament is required, because a stock that is not getting love from the market for some time, is likely to continue to not get any love anytime soon – and therefore, trade lower, for the short term. But investing is for the long term, so the short term price variation should not play a role when deciding to invest. It’s also a lot easier to have the required temperament to wait the stock to go back to its intrinsic value if the company pays (and grows) dividends.

This all makes sense, and the next natural step for our final piece-of-mind is to ensure the current valuation is not a value trap. If these fundamentals metrics are good and consistent with the past 10 years for the company, I buy it. If it’s inconsistent or deteriorating, I don’t buy it – but I don’t sell either, since the criteria to sell is a proven record of deteriorating earnings for at least 1 business cycle (5 to 7 years), without any signal of improvement.

The best way to proceed with this is to have a glance on some metrics that indicates that fundamentals didn’t deteriorate severely, and the stock is estimated to grow earnings at some point in the future. The graph above already shows an estimated decline in earnings of 4% (which is no big deal) and a recovery in the following year by 4%. The next metric that I would look is the market consensus for the long term, which seems good from the perspective that there’s no signs that fundamentals are deteriorating, and therefore, it’s unlikely to be a value trap: Analysts have a reasonable understanding of the business, and this is not a cyclical sector, so market consensus has a good reliability, which indicates safety in using this metric for the quick peace-of-mind that fundamentals are still in line: Another quick glance one can use are some key fundamental metrics for financial comapnies, to minimize the probability of value trap. As per the first post, I like to see how Return on Equity and Book Value per Share / Common Equity / Tangible Book Value has been performing in the last 10 years. Additionally, another way to determine the quality of ROE, for financial companies, is the Return on Tangible Assets (ROTanA). It basically shows how productive a company is with its assets, so the higher the ROTanA, the less leverage the company will need to use to achieve ROE. All numbers have been solid, and no signs of deteriorating recently, which again reinforces the idea that it appears safe that the current price is not a value trap: EQB is fairly valued, trading in line with its historical 5-year blended P/E of 7.5: HCG is very undervalued. Like CWB, there are lots of speculations that the economy in Calgary, and the housing sector, will soon collapse, so many institutional traders are shorting this company. I think it’s an exagerated move, putting the stock to trade way below its intrinsic value. As I did for CWB, I put a 10-year graph comparison, to show that the negative sentiment seems to be repeating, while unfounded: I will not speculate on the housing sector “soon to collapse”. Instead, focusing on the business, of what its executives expect (and they know way more than I do), and what the market consensus expect (they are also better informed than I am), this seems to be another classical case of a great company not getting the love of the market. Last quarter results were reported a few days ago, with stable net income and great credit performance. ROE during Q3 2015 was 18.7% and 19.2% for the first 9 months of 2015, which is pretty good. Total write-offs was unchanged from same quarter last year and it was lower when comparing the first 9 months of this year with the first 9 months of last year. Total originations, that many feared would keep declining, was up 23.6% quarter-over-quarter, and down slightly from a year ago. They purchsaed 107,000 shares last quarter and they plan to purchase more, a great move considering how undervalued this is. In the last 28 years, dividends are up 22% year-over-year. But the best news for Q3 was the recent acquisition for CFF bank to diversify funding. The deal furthers Home Capital’s goal of becoming a schedule 1 lender after it applied for the license last year. Along with assets, Home Capital gains new customers and employees in Ontario, Manitoba, Saskatchewan, Alberta and British Columbia, according to the statement. A schedule 1 banking designation would provide Home Capital with the ability to accept deposits and have those deposits eligible for insurance by the Canada Deposit and Insurance Corp., like the country’s largest lenders. These measuries reduce a lot of risks for this company, and like the CEO Gerald Soloway said on the last call regarding institutions shorting his company, “a shorter is a future buyer”. Lastly, it’s great that analysts have a good track record in estimating results, which helps with the confidence: IAG is a bit undervalued, like most banks. Long term estimates are solid and present a nice opportunity: IFC is fairly valued. Although long term estimates a decent total return, the company has a history of unpredictive earnings surprise, but the overall consensus is still positive: Intact is the largest P&C underwriter in Canada, with the majority of revenue coming from personal insurance lines. Intact’s average ROE over the long-term is around 15%, 5 points better than the industry average, so I have a positive bias towards the inconsistency regarding earnings estimates. Intact is targeting a market share of 25-30% compared to 17% currently. The potential for accretive acquisitions provides M&A optionality. MIC is slightly undervalued, including the lower earnings estimates for this year and next year, it’s still a good opportunity given the long term estimates. Current headwinds regarding Calgary’s economy will contribute for lower earnings, although it counts for 20% of MIC’s insurance. The loss ratio is presently low, so there is a lot of margin to absorb incremental claims losses. What matters the most is that they have a strong balance sheet and excess regulatory capital, so anticipated losses from Alberta should not stress the balance sheet. They have been paying dividends for a long time, and since 2007 they have been increasing it every single year, and never cutting it, including during their worse earnings performance, between 2002 and 2004 (looking at the last 20-year period). NA is fairly valued, and long-term estimates also look reasonable offering a good opportunity for one to start today: RY is also fairly valued, with a similar picture like the other big banks, posing a good opportunity for a long term investment: