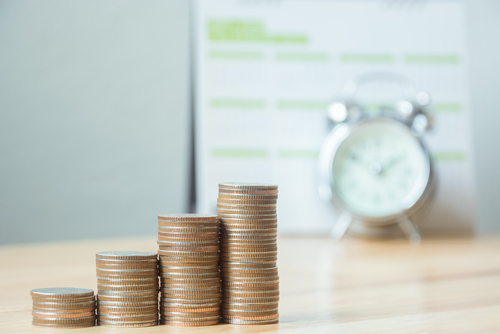 As I mentioned on my previous post of my recent Canadian companies purchase, the market as a whole might be overvalued, but the beauty of value investing is that there are always bargains to be found (individual companies trading below or at fair valuation). Like Buffett said before, the market throws daily prices at us, but we don’t need to swing at them. We can take our time to only swing (buy) when we believe Mr. Market is appraising these companies according to what we’re willing to pay. The companies covered below are the ones that I believe are being pitched with the right price, so I will be swinging at them.

Earnings season starts soon, and a few of these companies might post disappointing results. That’s ok. I’m not buying them for the short term. The same way that I won’t celebrate if they had a good quarter and price jumps, I won’t regret if they had a bad quarter and price dives further. No business is capable of generating perfect earnings and cash flow growth every quarter, and every investor should expect that many of their holdings will have a bad quarter or bad year. I’m ok with that provided that fundamentals remain sound, and management remain engaged to react and adapt. These companies (as well as the companies on my watchlist) have a good tracking record of such behaviour, hence my comfort level to partner with them for many years. I will be tracking them every year, and make decisions based on the business performance (not stock price). But we shouldn’t penalize a business for a bad quarter unless there are visible signs that fundamentals strongly deteriorated or if the business no longer meet your goals (for example, dividends suspended).

I typically allocate C$2,000 per month to add to my dividend growth companies, and since my last purchase was in July, this gives me C$6,000 to invest this month, which has been tracked on the Investing Performance section.

I have purchased the following companies, which I believe are fairly valued (or undervalued) and estimated to grow:

My first purchase is Johnson & Johnson (JNJ), adding to my existing positions: 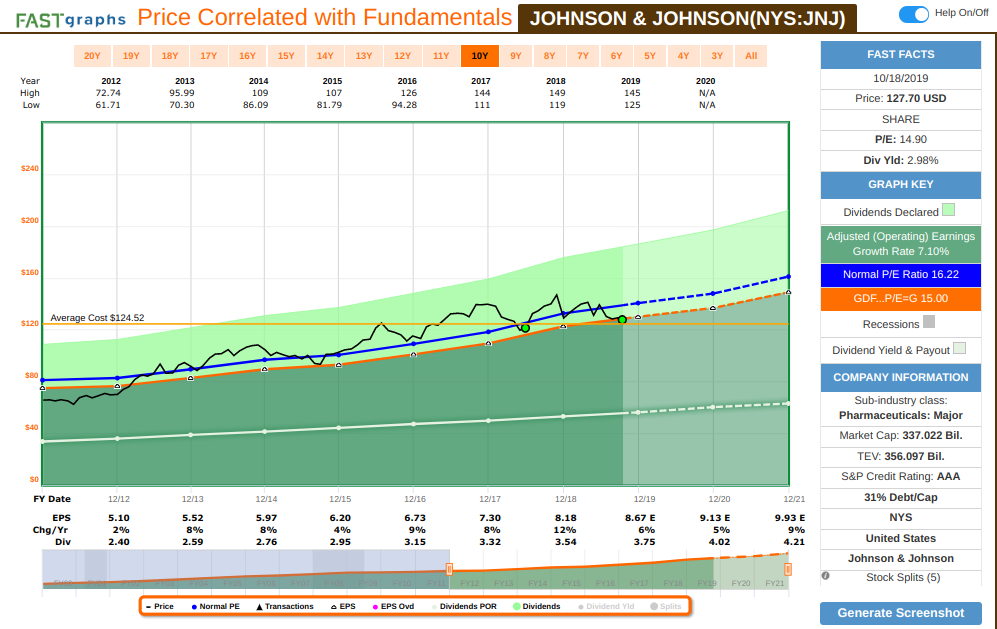 JNJ reported a strong quarter, but sentiment is negative with the litigations and recent recalls. However, the business is estimated to continue to grow earnings, cash flow and dividends, and these setbacks are temporary. JNJ is a great business that is constantly trading at premium, so opportunities like this are great to add more shares. JNJ has multiple businesses that generate substantial cash flow. JNJ also boasts strong free cash flow (operating cash flow less capital expenditures), which is about  over 20% of sales. Their strong cash generation has enabled JNJ to increase its dividend for over the past half century, and it’s expected that this will continue. It also allows them to take advantage of acquisition opportunities that will augment growth. 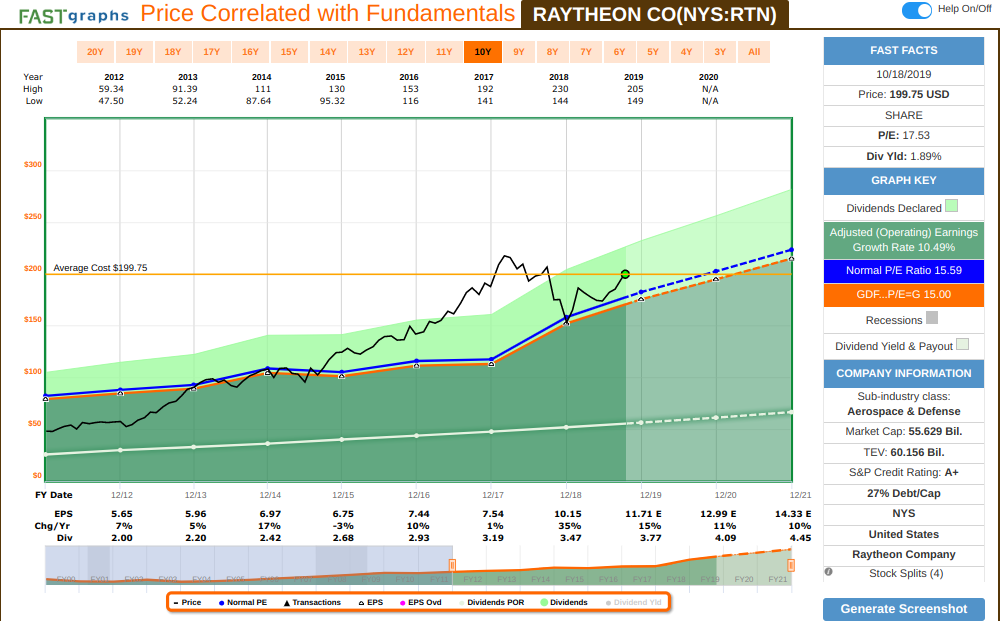 Raytheon (RTN) is one of five major United States defense contractors left after a wave of mergers during the 1990s
and early 2000s consolidated the industry. RTN operates five segments: integrated defense systems; missile systems; space and airborne systems; intelligence, information, and services; and Forcepoint. IDS specializes in radars and missile defense; MS produces munitions and missiles; and IIS focuses on services, offering training, engineering, and logistics. The Forcepoint business focuses on cybersecurity for government and commercial customers. They report earnings this week, and during last quarter they not only exceeded estimates, but also management raised FY19  guidance: revenue estimate to $28.8 billion-$29.3 billion (from $28.6 billion-$29.1 billion) and EPS estimate to $11.50-$11.70 (from $11.40-$11.60). RTN posted record bookings of $9.5 billion (increased 9% year over year), with a solid book/bill ratio of 1.32 times. Strong demand for its solutions has given management confidence to raise its 2019 bookings outlook by $1.5 billion to the range of $31 billion to $32 billion. Moreover, total backlog also reached a record $43.1 billion, up from $39.9 billion at the end of the second-quarter 2018. Significant contract awards included bookings with Romania, Qatar, and Germany for its Patriot missile defense systems totaling $1 billion. Raytheon’s healthy backlog positions the company well to continue growing revenue in the near term. This info is from last quarter, further updates will be done this week when they report their results on October 24th.

My third purchase is Comcast Corp (CMCSA), adding to my existing positions: 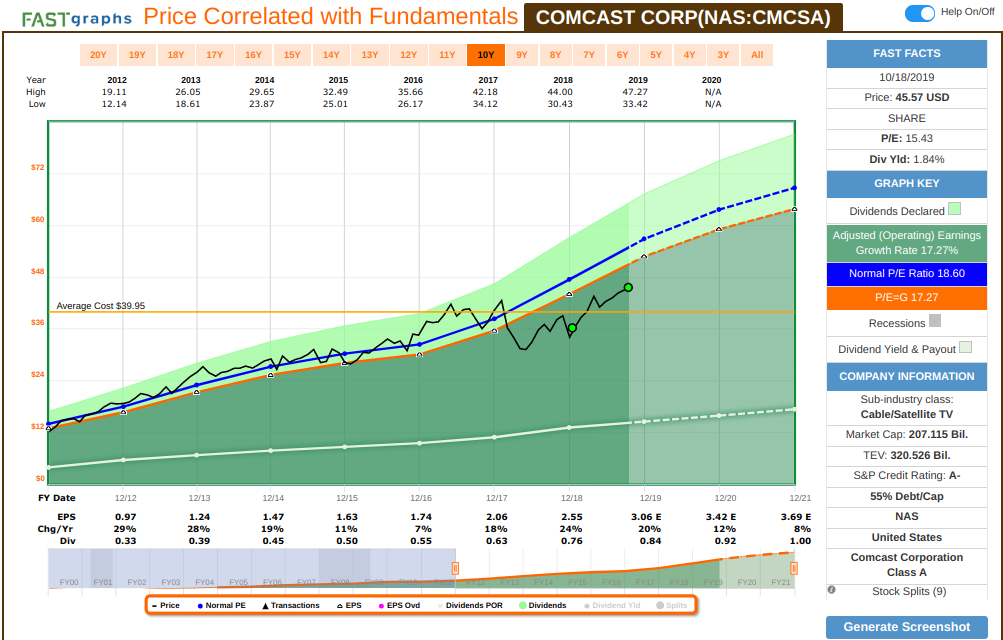 CMCSA continues to demonstrate to be a solid business trading at a fair valuation. They also report this week (October 24th), where we’ll get further updates on their results and some concerns from last quarter (slower cable growth). I am not concerned, as consumers are cutting the cord for video (not Internet), and Comcast provide a reliable way to stream what consumers are switching to: Netflix and Amazon Prime videos, confirmed by last earnings call statement that “Strong connectivity results and focus on cost control, coupled with the decrease in cable CapEx intensity as the mix of our business continues to shift. Together this drove a 22% increase in net cash flow at Cable in the first half of the year.” Considering 2 years of forward looking estimates, CMCSA has been growing at a fast pace at 17% annually for 10 years, and yet, the stock is trading at a great discount.

My forth purchase is 3M Co. (MMM), initiating a new position: 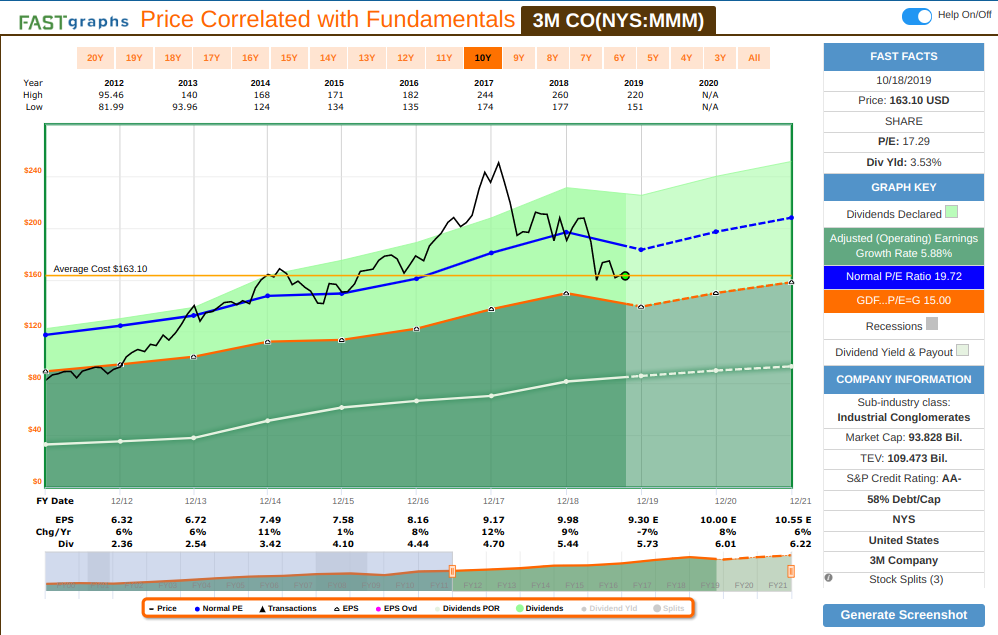 We can see on the graph above how 3M was overvalued, and the recent negative sentiment is a great opportunity to start or add a position to this great business. Market sentiment has turned against 3M stock for three reasons: 1) slowing organic growth as the company matures; 2) recent weakness in the auto, semiconductor, and Chinese markets; and 3) litigation risks related to PFAS.  Management continues to react and adapt, by innovating and keeping competitors away with strong levels of R&D spending, which totals about six percentage of net sale. Furthermore, 3M continues to benefit from its shared technology platforms which is applicable to multiple use cases, allowing them to charge a premium for its products, while bringing down its unit costs. A week ago 3M announced 3M that it completed the acquisition of Acelity, which at an enterprise value of $6.7 billion, representing the largest acquisition 3M has ever made – there will be a lot of unknowns and potential challenges, but 3M has an excellent tracking record of execution and integration. As a dividend growth investor, I like their solid tracking record in growing earnings, cash flow and dividends, as well as the fact that they are considered a defensive stock.

My fifth purchase is Simon Property Group (SPG), adding to my existing positions: 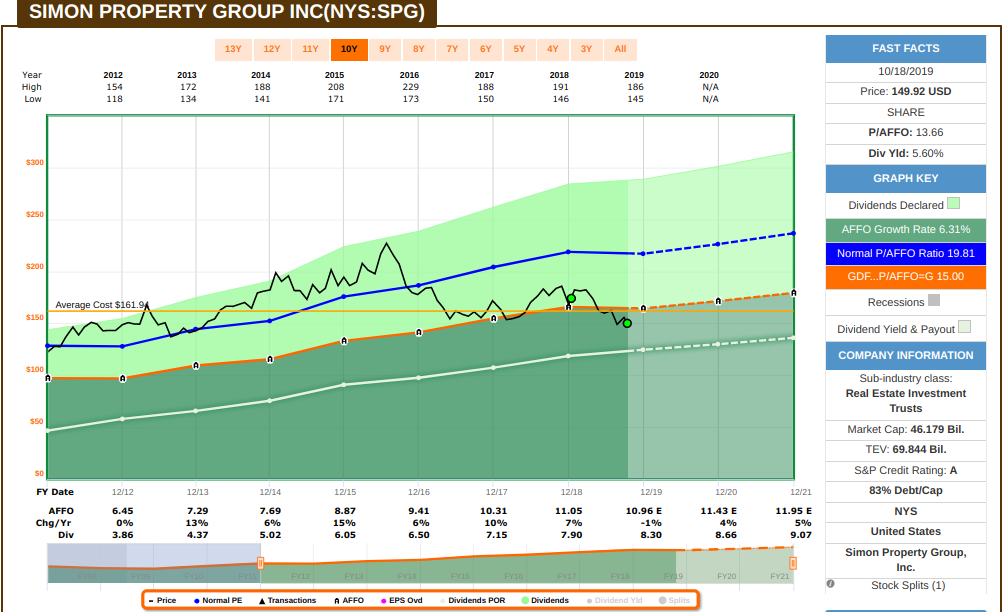 Retail is getting attention again, with the news of retails like Forever 21 going bankrupt, alied with the rapid growth of e-commerce as consumers shift an increasing number of their buying habits online. However, there is a distintic difference between high-quality and low-quality retail locations. Retailers want to place their stores in the best locations, even in a retail environment when retailers are closing stores. Many formerly online-only e-tailers are opening stores in the highest-quality locations. Meanwhile, struggling retail locations will face store closures, and increased vacancies lead to lower sales for remaining tenants. So while store closures are expected to dominate headlines, there’s also an expectation that the top retail locations should be mostly spared from the brick-and-mortar attrition. That’s where SPG shines. SPG has portfolios with high-quality retail assets that should produce continued, solid growth, as they are estimated to continue growing foot traffic, drive higher sales growth, and be less impacted by store closures than lower-quality retail. From a fundamentals perspective, Management has estimated about $1.5 billion in free cash flow this year available for redevelopment projects – which shows both the safety of the dividend as well as their strong financial position to support ongoing redevelopments. Furthermore, SPG has been very conservative with debt to NOI at 5.1 times and they have $5.9 billion in available capacity under their credit facilities – these give the company significant flexibility both in raising capital as well as helping to refinance debt maturities (which total $2-$3 billion annually) in the event of a recession or great financial crisis. Besides that resiliency, the current $7.6 billion development plan, which SPG is self-funding, is expected to drive about 5% to 9% long-term cash flow growth. So I see the current price as a value opportunity to partner with a company leader in high-quality retail space, which is estimated to continue to have a presence and grow.

My sixth purchase is Exxon Mobil (XOM), adding to my existing position: 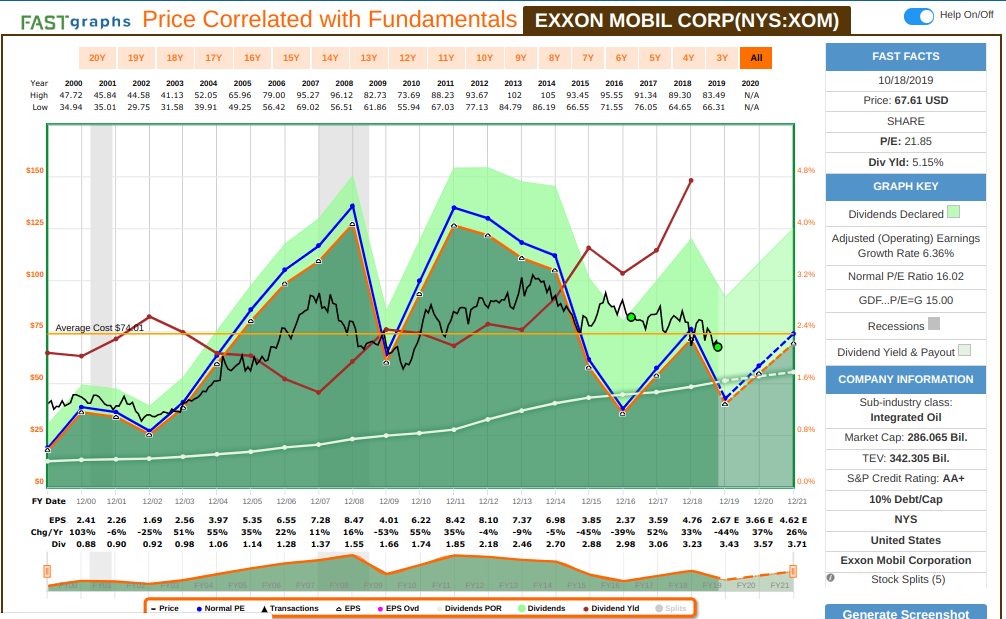 The rationale is similar to my Imperial Oil purchase on the Canadian side. The red line above shows the current yield, which is at a 20-year high. XOM’s operating performance is very erratic due to oil price fluctuations and market sentiment, but they are one of the best operators in their field and have an impecable tracking record of growing the business in a way that dividend growth remains sustainable. XOM has the lower debt to market cap in the industry, and a respectable credit rating, which is paramount in the type of industry that they operate. During last earnings call, management stated that between 2019 and 2025 Exxon estimates that $60 average oil prices (the long-term analyst consensus) would generate $190 billion in free cash flow, 53% of which would fund dividends and the rest debt repayment buybacks and additional growth opportunities (including in green energy). For this year, free cash flow is estimated to be at the lowest level of the last 20-year not only due to low oil prices or the weakest refining (industry-wide) margins in a decade (a temporary condition), but also because Exxon is ramping up capital spending (which reduces free cash flow) to the highest levels in its history. Analysts estimate that Exxon is planning to ramp up capital spending with the goal of doubling earnings and cash flow from 2017 levels by 2025 and delivering a return on capital employed of 15%, compared with 9% in 2018. While investors have been clamoring for greater capital discipline from integrated oils, Exxon’s view is it holds a host of high-return projects that can leverage its superior integrated model and thus warrant the investment.

Just some ideas to keep building a portfolio, one business at a time, following the same principle regarding quality and valuation, to build a portfolio that will provide a perpetual stream of growing income.