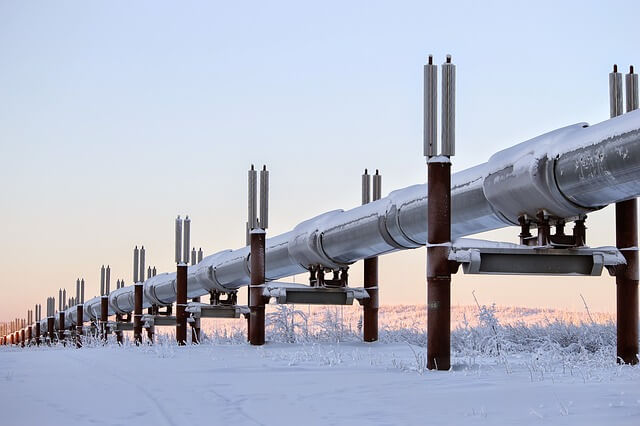 Enbridge, the stock, just keep making new lows and making a lot of investors nervous. I believe this is because these investors are focused too much on Enbridge, the stock, and not so much on Enbridge, the company.  Also, few have a good understanding of how midstream companies work and how Enbridge is structured – there’s a lots of misleading information that Enbridge is still expensive because the wrong valuation metrics are being used, such as P/E.  For these types of companies, EPS is not a good metric due to high non-cash depreciation expenses, such as the capital intensity of building and maintaining all of its pipelines and terminals. Look how DD&A metric (depreciation, depletion and amortization expenses) impact earnings. Hence a better valuation metric for midstream companies are cash flow, precisely available cash flow from operations (ACFFO). It measures how much net cash the company is bringing in, minus any preferred dividends and maintenance capital. Therefore, it is a solid measure of how much cash flow the company has remaining to pay its dividend and to invest in growth projects. BTW, Enbridge refers to ACFFO as distributable cash flow or DCF.

From a quality perspective, Enbridge continues to deliver well. According to their last annual report, ENB reported good results, with an adjusted EBITDA of $3 billion, up significantly from the prior year of CAD 1.8 billion. The increase in performance was attributable to the positive impact from the new assets as part of the Spectra Energy Merger coupled with record-high throughput levels on the Canadian Mainline and Lakehead systems. DCF for the 4th quarter came in at $1.05 per share, up over 10% when compared to the fourth quarter of 2016, due to a few factors: Performance, generally is expected from legacy Enbridge and legacy operating assets; the impact of new growth projects coming into service; and the realization of cost savings and merger synergies, which continued to grow over the course of 2017. Regarding ENF, its DCF was up $74 million from Q4 last year and $139 million from 2016, in line with the guidance. Growth was driven primarily by higher throughput and higher tolls in the Canadian liquids Mainline, strong demand for seasonal firm capacity on the Alliance natural gas pipeline and better results from the fund’s green power facilities, which benefited, again, from stronger wind resources in the second and fourth quarters of 2017. ENF’s DCF is expected to stay neutral in 2018, with revenue on the Mainline driven by higher average throughput, a higher effective FX hedge rate and a full year’s contribution from the regional oil sands pipelines we placed into service last year. And the longer-term outlook continues to support 10% annual dividend growth at ENF through 2020, as Enbridge group announced at Enbridge Days.

So Enbridge has delivering their goals successfully, being well managed and has set strong guidance for the next 3 years.

The other important component is understanding how Enbridge operates and what are their advantages when compared to their competitors:

Enbridge, like any midstream companies process, transport, and store natural gas, natural gas liquids, crude oil, and refined products. Enbridge’s efficient scale is likely their best advantage compared to peers:  Pipelines are characterized by relatively high barriers to entry, high capital costs, and significant regulatory oversight. Regulatory approvals are granted only when an economic need for pipelines exist. Once approval is received, midstream firms typically seek to lock in project economics through long-term contracts with shippers before ever breaking ground on a new project, ensuring that at a minimum project and capital costs are recouped, with potential for excess returns over time. Generally, firms will not pursue expansion opportunities without securing contracted capacity. While the competition among midstream firms for new projects is fierce due to the finite demand for additional infrastructure, once a pipeline is in service it tends to enjoy excess returns. Single pipelines can be attractive; however, a network of pipelines that serve multiple end markets and are supplied by multiple producing regions is much more valuable. Because oil and gas are fungible, midstream firms can optimize the flow of hydrocarbons across their systems to meet producer or end-user demand while locking in geographic price differentials, or use storage facilities tied to the network to lock in price differentials across time periods. Extensive regulatory oversight of Enbridge’s assets acts as a barrier for new entrants, with many federal, state, and local agencies involved in permitting, siting, and rate-setting activities. Regulators in Canada and the U.S. permit Enbridge to recover costs to operate pipeline networks by collecting tolls for services. Regulated tolls include the recovery of the pipeline’s investment, a rate of return on the investment, and pipeline operating costs. The regulatory oversight provides stability in returns that typically exceed the company’s cost of capital. As a result, Enbridge generates new project returns on equity that typically range from low double digits to mid-teens. Regulation also protects pipeline infrastructure from becoming oversupplied, as projects are not approved unless economic need for expansion is demonstrated. As such, regulation keeps out competitors and acts as an intangible asset to existing pipeline operations, such as Enbridge.

Canada’s oil sands supply is landlocked and separated from the majority of its refining markets by large distances, relying on pipeline transportation. Pipeline takeaway capacity from the country approximates 4 mmbbl/d, with approximately 70% of the capacity residing on the Mainline system. Increasing environmental and government regulations, as well as political opposition, have made new pipeline projects increasingly difficult to sanction. According to one of the firms covering Enbridge, it’s expect that three major pipeline expansions will move forward: Enbridge’s Line 3, Kinder Morgan’s Trans Mountain expansion, and TransCanada’s Keystone. While the three projects are expected to add 1.8 mmbbl/d of new pipeline capacity, Enbridge will still be the main player in the space, holding 60% of Canada’s pipeline takeaway capacity. Furthermore, the Mainline offers more access to the U.S. Midwest, where producers can maximize netbacks, compared with competing pipelines along with lower tolls to the U.S. Gulf Coast.

Enbridge is further exposed to production growth from the oil sands with its regional oil sands pipelines network. The company’s major regional pipelines provide transportation from all three of the oil sands locations but are primarily focused on the largest region, Athabasca. Enbridge has long-term contracts with shippers on each of its existing pipelines with an average duration of 20-25 years. Pipeline expansion projects are underpinned by new production growth projects, and contracts extend over the life of the associated production project. In addition to the crude oil pipelines, Enbridge’s current natural gas assets possess attractive economics with stable cash flows that help the company generate excess returns. The Spectra Energy acquisition expanded Enbridge’s portfolio to include U.S. natural gas pipelines. On average, the pipelines have a remaining contract duration that exceeds 10 years with over 95% of the capacity contracted. Enbridge’s Canadian natural gas pipelines are in position to benefit from growing production in the Western Canadian Sedimentary Basin, highlighted by the Alliance Pipeline. The Alliance pipeline is the only rich gas export pipeline from the Western Canada Select Basin, but can also export dry gas. Shipments originate from the Horn River, Montney, Duvernay, and Bakken formations and are transported to the U.S. Midwest. Canadian natural gas production is expected to increase at a 9% compound annual growth rate over the next decade, accompanied by growth in natural gas liquids.

The combination of attractive regulated returns, near- and long-term expansion projects that are underpinned with long-term contracts, and a vast, diverse midstream network allows Enbridge to realize efficient scale on its midstream asset economics and to generate sustainable excess ROICs. Regulatory approval on crude expansion projects also prevents competitors from undertaking expansion projects without necessary approval, acting as an intangible asset for Enbridge on its Mainline operations. As such, we project that the firm will achieve excess returns on capital within five years and conclude that Enbridge possesses an economic moat. Difficulty obtaining regulatory approval on major pipeline expansions, attractive regulated tolls that exceed the company’s cost of capital, and 20- to 25-year contracts on regional pipelines afford the company a wide economic moat.

For these reasons, Enbridge is trading at a very attractive valuation, where negative sentiment from rising interest rates are disconnected from how well Enbridge is positioned economically to grow: 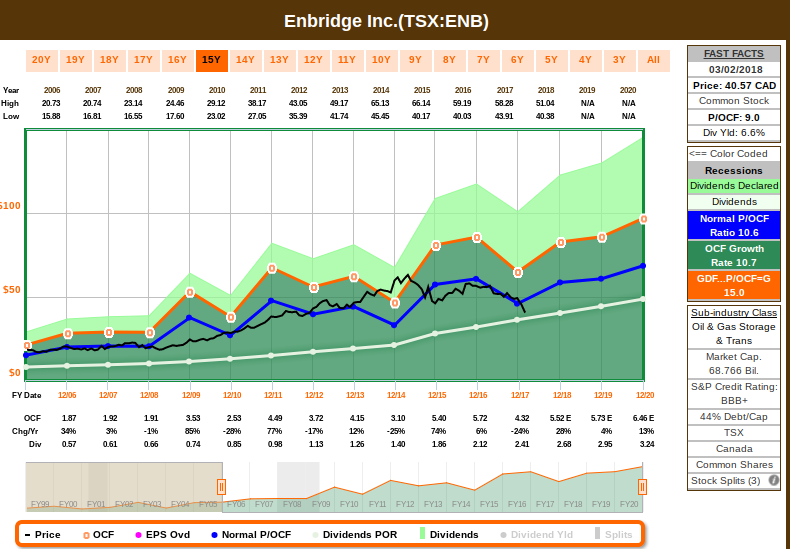 Enbridge just reported that they put $12 billion of assets into service, $6 billion to be placed this year. These are low-risk solid-return projects, generally low-teen returns on equity that are going to drive cash flow growth in the coming years.

S&P, Fitch and DBRS have all reaffirmed their BBB high-level ratings based on their comfort with Enbridge’s plan. Moody’s downgraded Enbridge to BAA 3 stable back just before  Christmas, and Ebridge is confident that it will deliver the target metrics that Moody’s have publicly outlined for a BAA 2 rating by the end of 2018.

As an investor that are constantly look what to buy, I think presently Enbridge delivers decent quality, dividend growth, attractive yield and a sound valuation for a superior total return down the road.