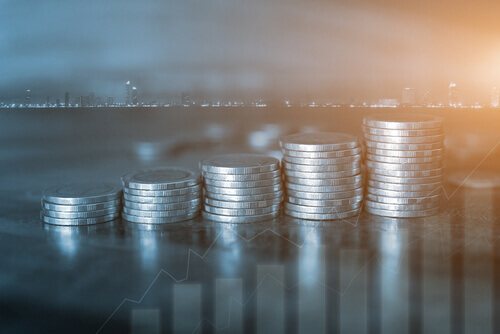 XOM is fairly valued in my opinion: 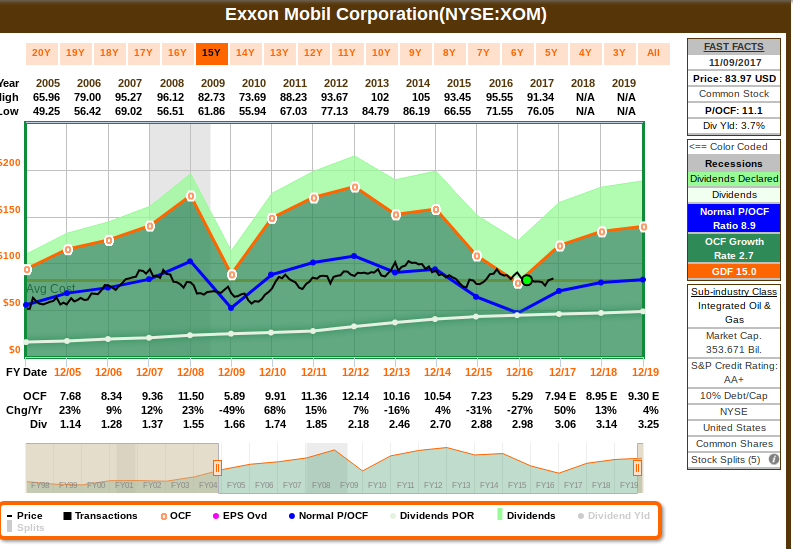 Stock price tracks cash flow more accurately, than earnings. The great thing about XOM is that they have enough strong cash flow to continue to grow dividends even though earnings have dropped recently, due to the low commodity price. From an income growth perspective, it does’t get safer than that: XOM always have positive free cash flow, even though oil price dropped a lot; most of large projects are complete, so employed capital for XOM will slow down and XOM can focus on smaller projects that generates free cash flow within 3 years. Current XOM structure allow them to safely cover dividends at oil prices as low as $40 per barrel. They estimate oil price to return to $60 as that will allow XOM to buy back shares again.

Cash flow is estimated to grow, as the company shift to shorter term projects: 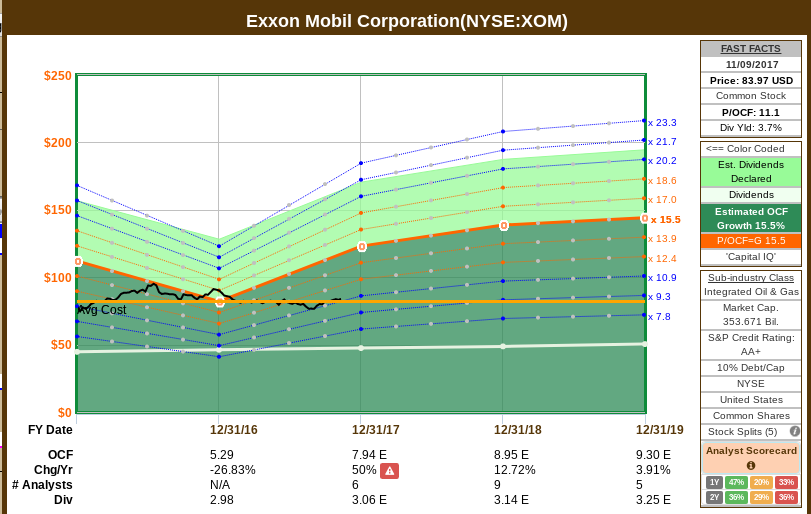 Earnings and dividends are also estimated to grow, with a strong market consensus: 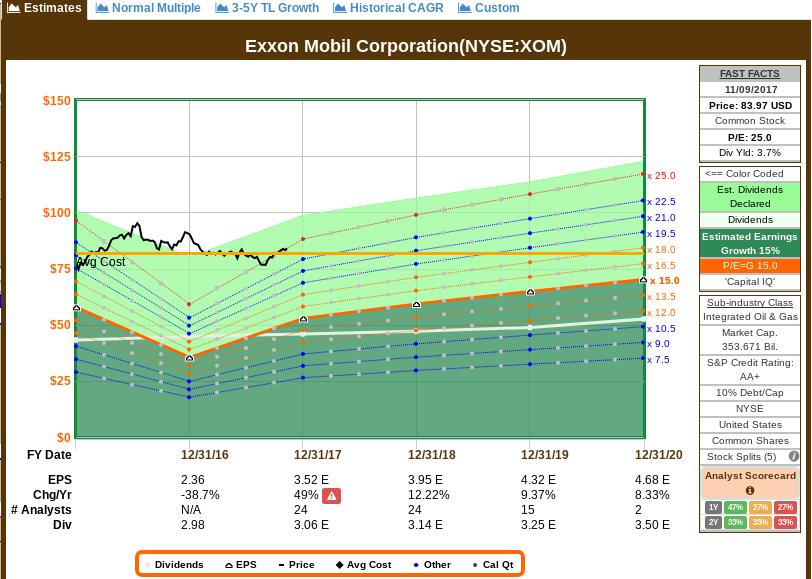 I’m confident on XOM’s ability to continue growing dividends in any condition, given its strong cash flow and record of 34 consecutive years of dividend growth, and paying dividends since 1911.

DIS is fairly valued in my opinion: 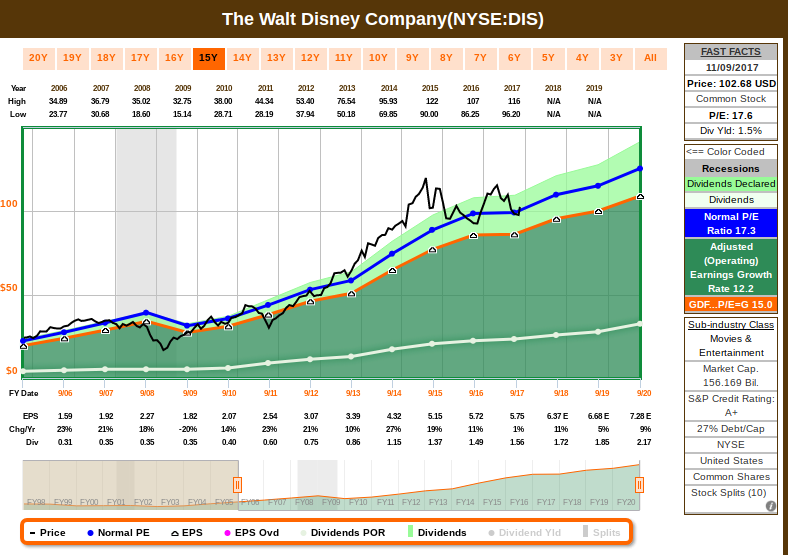 This is a very well managed conglomerate, which is actually composed of 2 distinct businesses: media networks, which include ESPN and ABC, and Disney-branded businesses, including parks, filmed entertainment, and consumer products. CNBC reported on Nov. 6 that Fox and Disney had discussed a potential deal under which Disney would purchase the entertainment assets of Fox. While the talks reportedly have been called off, they could resume in the future. No details on the price, structure, or timing were leaked. Under the proposed deal, Disney would buy the Fox television and movie studios; cable entertainment networks, including FX; and the international assets, including 39% of Sky. Fox would continue to own the broadcast network, FS1, Fox News, and its owned and
operated local affiliates. Regulatory concerns are probably the main reason for the deal not including these assets.  During the last earnings call Disney also announced that they are looking forward to launch their first direct-to-consumer streaming service in the new year.  DIS continues to innovate, grow earnings and dividends at a high pace, and I look forward to continue the partnership with them.

AAPL is overvalued in my opinion: 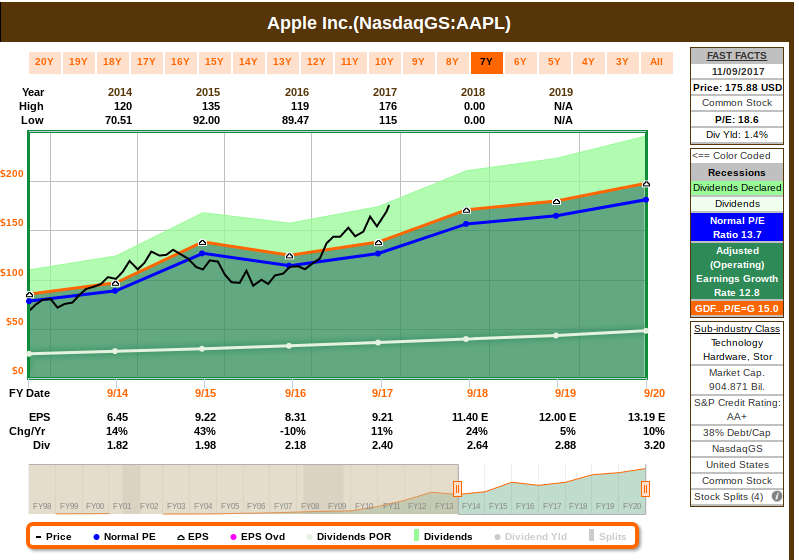 Market consensus estimates 13% CAGR growth, which is aligned with the earnings growth rate above. Therefore, I’m not sure if it’s justified to be trading at a higher multiple, when AAPL has been trading at a P/E of 14.5 for the last 10 years. The overvaluation is largely because Apple reported strong fiscal fourth-quarter results with impressive revenue growth in non-iPhone businesses, such as Mac, Services and Other Products (including Watch and Airpods). Meanwhile, the firm’s first-quarter forecast implies healthy demand for both the iPhone X and iPhone 8 series. Despite a minority market share position in the smartphone industry versus Android, Apple continues to retain pricing power as early signs around the iPhone X indicate to us that the firm will successfully be able to raise the bar on pricing, which should generate higher margins. For the December quarter, Apple expects revenue in the range of $84 billion-$87 billion, which was roughly in line with Street consensus and would represent 9% year-over-year growth – very impressive, as well as it’s hard to understand that this is a $900 Billion company, with almost $270 Billion in cash. The overvaluation might continue with such positive sentiment, so at least one can calculate the risks associated with a lower margin of safety.

Visa, a very well managed business is a great example of dividend grower and growth stock – but it’s presently expensive: 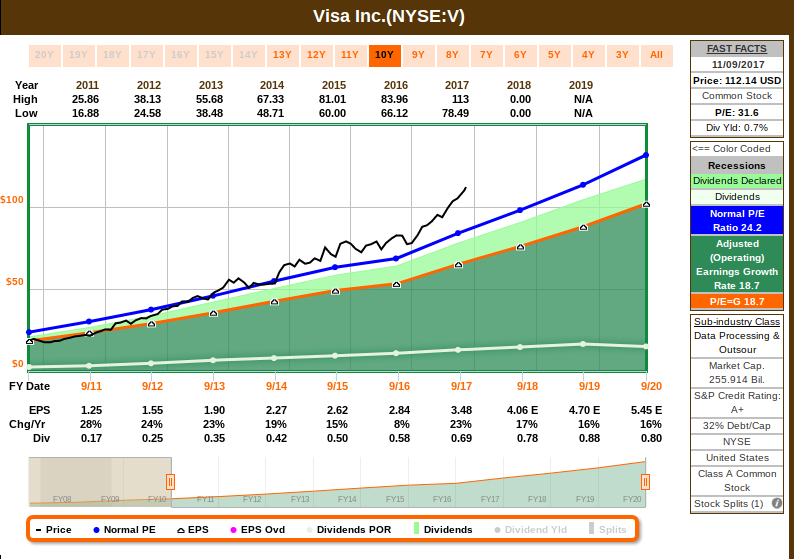 Both dividends and earnings are estimated to grow at a high rate, which helps to drive overvaluation. The euphoria should continue while Visa continues to beat or meet expectations, but we all know how these growth stocks are penalized when they miss results. There is a strong street consensus covering Visa, and there’s an argument for at least partial exposure, with the caveat that it has a lower margin of safety: 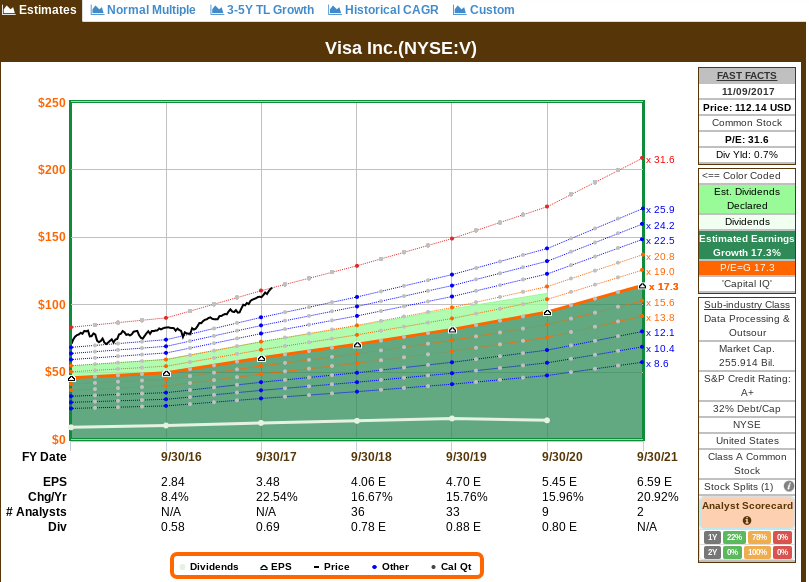 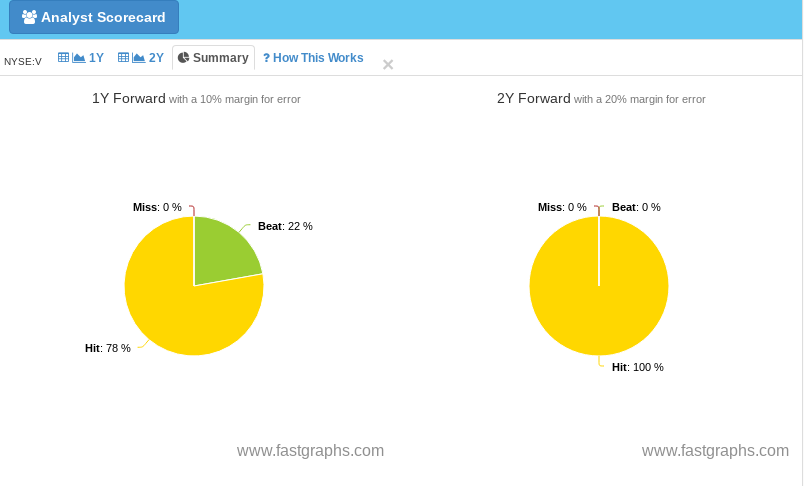 According to the latest Nilson Report, Visa dominates the global market for electronic payments, accounting for about half of all credit card transactions and an even higher percentage of debit card transactions. Visa reported excellent results last quarter, exceeding estimates and have a strong guidance for earnings and revenue for 2018. However, the current valuation expects Visa to grow at a rate much higher than they are estimated to grow, hence indicating that it’s currently overvalued.

AT&T is undervalued in my opinion: 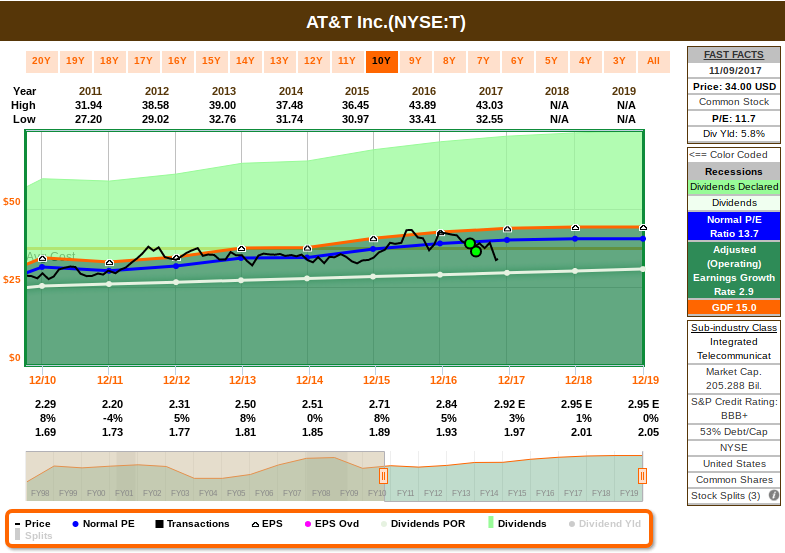 Earnings and cash flow are estimated to be flat to almost no growth, but there are lots of room to continue the strike of 33 years of consecutive dividend growth: 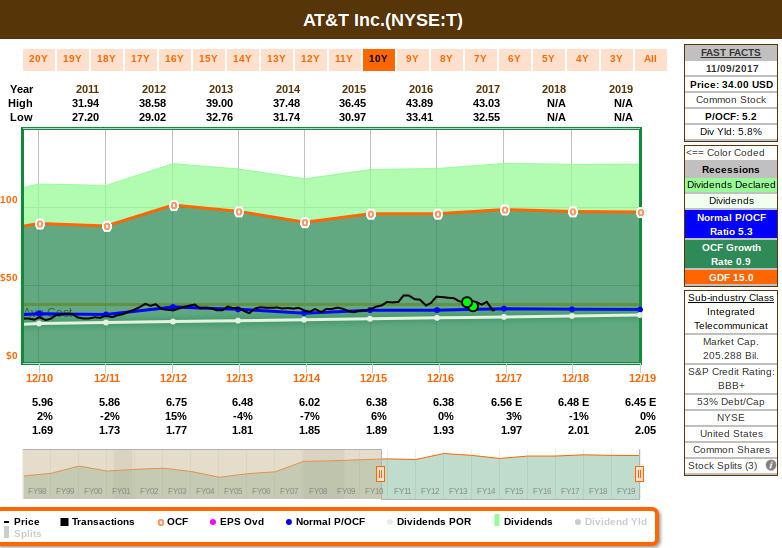 The recent price dive is a result of negative sentiment, as the press reported that The Department Of Justice wants AT&T to divest either Turner Networks or DirecTV before approving the merger with Time Warner. These come on the heels of a report last week from The Wall Street Journal that the Department Of Justice would sue to block the merger. AT&T has stated that the company has no intention of selling CNN (one of the networks under Turner) and has not offered such a sale to the Department Of Justice as part of the negotiations about the deal. I view the current news as an opportunity to add more, since AT&T and Verizon dominates the wireless market in the US, with 70% market share.  Part of the decline was due to AT&T results last quarter – although earnings and revenue came in slightly below Wall Street expectations, AT&T maintained its full-year guidance. Analysts project that AT&T will report full-year earnings of $2.93 per share on $160.86 billion in revenue.

According to one analyst’s report, AT&T is able to spend less on network service delivery per connection and selling, general, and administrative expenses per connection, while still providing superior network and customer service quality. Driving cost efficiencies is an ongoing effort at AT&T. The company continues to drive down network delivery costs and SG&A expenses through initiatives such as network virtualization, software-defined networking, automation, and digitalization. AT&T is also able to invest less in capital expenditures as a percentage of wireless revenue and still build out a premier network in the U.S. AT&T has historically spent about 16% of wireless revenue on capital expenditures, whereas T-Mobile and Sprint have spent close to 19%.  AT&T’s wireless EBITDA margins are still vastly superior to T-Mobile’s and Sprint’s (which are in the low to high 20s.) Outside of Verizon, no one else in the industry comes close to AT&T’s wireless profitability.  Another advantage for AT&T Mobility is that new entrants generally face massive upfront costs to acquire wireless spectrum and build out networks. Differentiating services is difficult in this business, so new entrants typically compete on price. Any new entrant would likely endure heavy operating losses that persist for a long time. Furthermore, any existing player attempting to gain market share risks lowering the returns of the entire industry. This is probably why Dish, with its approximately $20 billion of spectrum holdings, has not attempted to launch a wireless business and why Comcast, with its vast resources and fixed-line reach, has only dabbled in the wireless market via its MVNO, or mobile virtual network operator, agreement with Verizon.

However, AT&T has its challenges: cable and wireless competitors have been gaining fixed-line customers for several years. AT&T continues to lose landline phone customers and has struggled to hold on to Internet access customers recently, ceding share to its cable rivals. While IP broadband has helped offset falling legacy DSL revenue, the profit AT&T captures in the average neighborhood is steadily declining relative to cable. As a result, the major cable firms will have a stronger incentive to continue investing in fixed-line networks to meet customer demand for faster data.  Having said that, business and wholesale fixed-line services generate about 19% of AT&T’s consolidated revenue. Cable has been successful at the low end of this market (small and midsize businesses) and is now starting to go after the high end (enterprises) as well. We believe AT&T is better positioned to retain enterprise customers over SMBs
because of its established reputation and enterprises’ need for best-in-class service. The firm’s global network reach and capabilities are unmatched and would be difficult for the cable companies (with their regional footprints) to replicate.  Therefore, even with limited  revenue growth opportunities, AT&T can leverage its scale to maintain returns – the quality factors are still there, and valuation makes it an attractive entry point for an attractive yield with dividend growth.

VZ is also undervalued, as it makes the duopoly pair with AT&T: 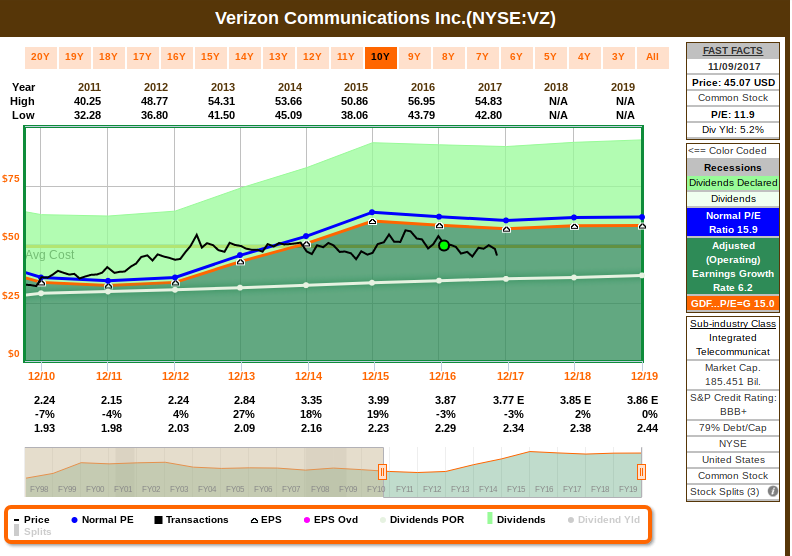 Although Verizon remains the leader in the U.S. wireless market,  T-Mobile and Sprint are disrupting Verizon’s core strategy of leading with network quality and monetizing increasing amounts of data traffic with their offer of unlimited data plans. In response, Verizon is attempting to move up the value chain with an array of service layer opportunities, thereby diversifying if not straying from its core competency of providing wireless access. Meanwhile, it continues to be a top reference for quality, and growth opportunities will materialize once 5G is available, as they’re developing it.

Verizon last results matched estimates, but there’s negative sentiment as there is speculation that Sprint and T-Mobile might merge. Verizon remains a solid business with good quality metrics, and I view the current valuation as a good entry opportunity to partner with a business that can consistently generate free cash flow and grow its dividend.